At its September 21st meeting the APHZAB accepted for its reviews the revised language in the Technical Standards Manual regarding windows. The Board will now have more flexibility to recommend approval of alternative window materials. Here is the relevant language from the meeting Legal Action Report (LAR):

The Board members then asked for certain clarifications. It was noted that the language merely allows the Board to consider alternate materials on a case-by-case basis, especially “clad” wood windows. Ms. Brown suggested that it could potentially allow certain considerations on historically authentic replacements that are now being manufactured. She gave several examples: vinyl is never considered appropriate as a material; some aluminum replacements may replicate historic steel windows better than other options; exterior and interior surface wood munitions and mullions may more faithfully recreate historic proportions on dual pane windows  rather than scaled up versions required for the heavier and thicker panes (noting that between glass snap in grids and exterior only designs are not considered appropriate; and that some fiberglass products may be better than modern wood replacements in specific instances. The option however will only allow for consideration of possible materials on a case-by-case basis. Further acceptable changes would require further updates to guidance than the language now in the code the Board is discussing.

For contributing (historic) properties, preservation and repair of original windows is the default choice. If this is not practical, alternatives will be considered with appearance being the main consideration. More durable and energy efficient windows may be considered. Dimensions and details of all window components should match the originals. The illustration depicts a classic double hung window with the components labeled. One element missing from this window are the ogees often found below and on both ends of the meeting rail. 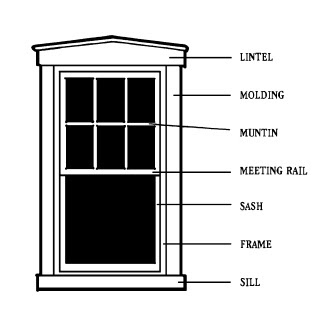 For new construction and non-contributing structures the Board is likely to require the general appearance of windows to conform to those of nearby contributing structures. The aspect ratio of proposed windows (ratio of height to width) is often the subject of Board concern. Windows with very large panes of glass are not likely to be well received since such glass was not available in 1945 (end of period of significance) or earlier. As sources for acceptable windows are identified, I will include the information in the website.

The same meeting reviewed several proposed projects including one regarding windows. The LAR will give you a sense of how the Board considers proposals and what matters are likely to be controversial. You can see the entire LAR at this link to the City website: https://www.tucsonaz.gov/files/clerks/uploads/bccfiles/33160.pdf.

at October 02, 2021
Email ThisBlogThis!Share to TwitterShare to FacebookShare to Pinterest
Labels: Historic Review